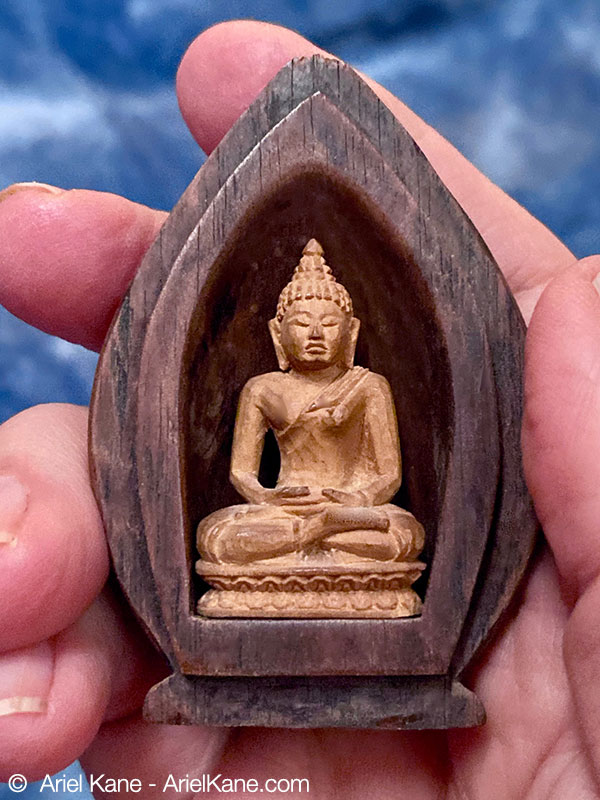 An excerpt from Being Here, Modern Day Tales of Enlightenment

Shya and I went to Bali, Indonesia for the first time as speakers for an Earth Conference, and it was there that we met Oka one day, seemingly by chance. Our tour bus had stopped at the residence of a famous mask sculptor in the little woodcarving village of Mas. Shya and I tired of the exhibit long before our fellow travelers and elected to wander off next door to kill some time and see what the neighboring shop had to offer. What started out to be a pleasant afternoon’s diversion radically altered the shape of our lives.

On our way to the inner recesses of the gallery, we were captured by the sight of figures in a small glass case, exquisite little carvings made from sandalwood. As the glass door opened, the pungent aroma of the wood wafted out to greet us. Shya picked up a small, perfect, serene carving of a Buddha head. Its features seemed quiet and alive – almost as if the Buddha could open his eyes and speak to us. As Shya held the figurine, a young man who had been leaning against the wall said quietly, “please, if you buy him, do not keep him out in the sun. He took me almost two weeks to carve.”

This soft–spoken fellow dressed in a well–worn sarong and white t–shirt was I.B. Oka, a twelfth–generation woodcarver. Oka is also descended from a long line of Hindu priests and white magicians, but we didn’t know that at that time either. All we knew was this fascinating fellow with a full head of jet–black hair looked far too young and far too unimposing in stature to have such mastery in wood.

There was something about Oka’s work that caught my breath and moved my heart at the same time. I appreciated the simplicity of form and style. Reluctantly and with reverence, we returned the Buddha head to its case so we could take a tour and see what other delightful finds were in other portions of the gallery. As we went through the next couple of rooms, admiring a mask here and a statue there, we found that most pieces that seemed to move us were made by Oka himself, even though there were many artisans’ works hanging on the walls.

As we continued through the gallery, soaking up the view and sipping cold water that Oka had offered, we came upon an extraordinary statue. In Bali, any set of parents that has four or more children is called a Breyut. Couples who are having trouble conceiving will seek out and bring offerings to a Breyut statue, which represents fertility and fruitfulness. There they will pray for a child. This statue was such a Breyut. It had been carved from the root structure of a hibiscus tree. Emerging from the solid wood center out to the root tendrils were a mother, father, firstborn and fifteen other children. The figures seemed to be resting in flowers or sprouting from flames. The children were all carved with almost no features and large spatular fingers as if they were waiting to be imprinted by the souls who were to inhabit them.

I had to touch the babies’ heads and trace the flames with my fingers. The surface was so smooth. For no apparent reason, I began to cry. I had heard of being moved to tears but not since I was young had I felt the same kind of inspiration that I felt being near this carving.

It was time to get back to our tour. Reluctantly I left the inner sanctum of the gallery. Shaking Oka’s hand, we thanked him for his time.

Later that night, I dreamt of the Breyut. The next morning, as I hovered between wakefulness and dreaming, I rolled on my side while visions of the Breyut filtered past my mind’s eye. I didn’t realize that Shya was awake until he said, “OK, Ariel, we’ll go back and get it. I knew we would find you a birthday present here. I just never had any idea it would be a four foot tall statue.”

We hired a car and drove back to Mas the next day, the Breyut drawing us like a magnet. Strolling to the back of the gallery, Shya and Oka had a conversation.

“My wife has fallen in love with one of your statues, Oka, and I hope we can afford it.”

“Which one?” came the soft reply.

Shya stood in front of the masterpiece and said, “This one, your Breyut.”

My heart sank but without missing a beat Shya looked him in the eye and said, “Well, if it was for sale, how much would it be?”

Dark intense eyes returned his gaze as if Oka were taking measure of the man before him. If we bought the Breyut, would we give these children of his inspired touch a good home, or were we simply foreign merchants looking to turn a profit by reselling his art? Eventually Oka named his price and we struck a deal.

We agreed to bring him the money in a few days when we had another break in our conference and he agreed to make a crate and pack our treasure. I was elated. As we were leaving, Oka looked at me. “When you return, Ariel, I will have a gift for you, a tiny sandalwood Buddha this big,” he said indicating the size of the tip of his index finger. “He will sit in an ebony case which looks like a closed lotus blossom. When you open the flower, the Buddha will be seated inside.” Shya and I looked at each other, trying to picture this. 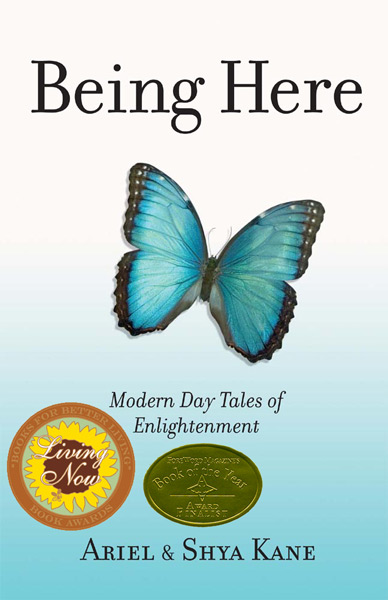 A quiet voice came up beside us. “Every night for over a year I carved on that piece of wood. My family thought I was crazy to spend so much time on something that would never be sold, but I had to do it. Already I have Breyuts in other villages that have helped to bring the villagers children.”

The day we returned with payment, Oka was true to his word. As he wrapped my hand around the ebony lotus, inside of which was hidden the little sandalwood fellow, his tone turned serious.

“Ariel, if you put this by your bed tonight, the Buddha will come to you in your dreams.”

Yeah, sure, I thought. Yet I smiled as I thanked him for the gift so I wouldn’t cause offense.

Despite my cynical immediate response to Oka’s suggestion, I was like a child with a new toy that day. I would have to wait months for my Breyut to arrive home to America, but I had a small tangible reminder of its greatness nestled in the lotus in my hand. Over and over throughout the afternoon, I opened the wooden flower to find the hidden treasure, serenely waiting for me inside.

That evening, before we went to sleep, I put the Buddha by my bed. Soon I had a dream:

It was night and I was standing on the edge of a miniature golf course with a putter in my hand. Standing near me was a young boy with blond hair who looked up at me and said, “Come on, Ariel! Let’s go Putt–Putt golfing.”

Just then I heard a familiar, soft voice, “Excuse me, please, but you know that is not true. You are very good at anything you enjoy doing.”

Looking up, I saw Oka. Balanced in his open palm stood the open ebony lotus and of course, the Buddha. I knew now that I was dreaming, but the feel of the club in my hand and the bright green of the imitation grass on the putting surfaces seemed very real.

Early the next morning when I awoke, the dream remained vivid. As simple as it was, it precipitated a profound shift in me. As I lay there in the semi–darkness of our room I became aware of Shya peacefully slumbering beside me, his deep and rhythmic breaths playing background music to my musings.

The message of my dream replayed in my head, “Excuse me, but you know that’s not true. You are very good at anything you enjoy doing.” Different scenes from my childhood and then more recent life played like a video. Distant events sorted and reorganized themselves even as I watched.

There were activities, projects and sports. There were the endeavors I had held as failures. Other vignettes I remembered as triumphs, and some fell in between. But somewhere in the midst of all these experiences, which I had always judged as successes or failures, was the truth that anything that had been inspired by my heart, expressions of my true self, I had become accomplished in. I also realized that other relationships and passions petered out not because I was no good at them, but because they were not a part of my true heart’s desire.

Moments in time strung together like pearls all leading to that instant. I felt a sense of perfection and deep relaxation. As I drifted back to sleep that morning, my face was a mirror of the miniature one sitting on my bedside table.

Thank you for sharing this story! This is one of my favorite in your book Being Here, because of its beautiful message on what a heart’s desire really means.
And thank you for sharing the picture of the ebony lotus with the little Buddha! Each time I read the story I wondered how it looked like. Now I know. 😀