You are a Gift

By Ariel
Home > Articles  > You are a Gift 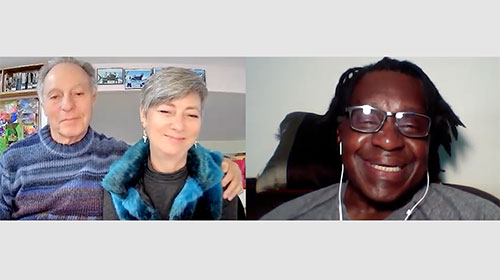 Posted at 00:00h in Articles by admin 3 Comments
Share

It was Monday afternoon and we had had a couple of tough days…and nights. The week before Shya and I had both contracted Covid. Sleeping, fever, aches. Shya battled skin so sensitive we needed to find the smoothest sheets in the house or the pain from friction prevented sleep. A course of the anti-viral, Pax-Lovid, and special immune boosting vitamins, lots of sleep and liquids became the protocol. Still, there had been a scary evening with Shya exhibiting sudden congestion and low oxygen levels and while he was now improving it was a slow process, one where his mind took hold.

Personal fears emerged: “Will I ever get well again? Will I die?” These thoughts merged with concerns about global warming, the political situation in the US, and the planet overall, to create a stew of negativity beating a tattoo in Shya’s head.

We lay back on our bed for a brief rest before I prepared to host our Monday Night Living Made Easy seminar. I suddenly had an idea. The day before, I had led a two hour seminar that had been recorded for participants who could not attend. I realized that this included Shya as he, under normal circumstances, would have facilitated the event with me.

I queued up the recording on my iPad and we began to watch. While this was not a normal Monday evening or Saturday Living Made Easy seminar, it was similar in nature. We talked about many things. People spoke about family vacations and how they had a new ability to simply be with their loved ones without judgment. We talked of a young couple purchasing their first home. The topics ranged from deep to light hearted, from a father’s recent passing to the joy of attending a roller skating class. As Shya and I watched and listened, our minds quieted and we forgot ourselves, our personal stories and Covid altogether.

At 5pm my alarm rang, reminding me it was time to prepare for the seminar. I was surprised when Shya announced, “I need to take a shower and shave.”

“You’re going to be there tonight?” I said in wonder.

Transformation had happened. Being with this group of folks, albeit via video, had been a great healing balm.

A short time later, we sat down in front of our computer and accessed Zoom. A few of the evening’s participants had already assembled and we were greeted warmly when our Zoom screen appeared.

“Yo Shya man, It’s great to see you,” Harold, one of the participants, said.

“Shya’s been having a tough day today,” I said. “He’s been plagued by thought loops about his health.”

Harold’s delight was infectious. It was clearly a communicable ease.

“Easier said than done,” I replied.

And there it was. A transformational moment. Harold didn’t do anything in particular. He was just being himself, a living, breathing expression of love and possibility.

“Live in the moment” can be a tired cliché. But in this instance it wasn’t. It was real. It was an invitation. It was a celebration of all Harold had ever been through in his life and all we had been through in our lives to come to where we were in that moment.

People have often said that when they have walked into a room with us, or when they tune into a Zoom seminar, Instantaneous Transformation happens, even before the seminar begins. I know it to be true. I have seen it happen often. But it is one thing to see it and know it and another to have it happen directly to you.

I am writing this article on Tuesday morning. Shya is exponentially better. In fact, he was well on his way to health before the end of Monday night. With each person who joined, each who expressed himself or herself, a transformation happened.

It wasn’t what Harold did that was transformational. What mattered was his presence – it was a gift. He was a gift.

YOU are a gift.

Love that story, love both of you and Harold and any other member of our community! I can confirm that I make the experience of instantaneous transformation not only while listening to your podcast – even when the jingle starts life feels bright and sweet!

This is brillant, I love it!