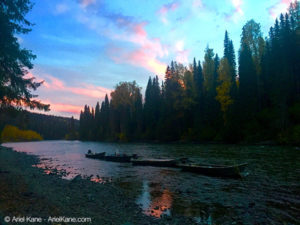 I entered the lodge in search of coffee. This was the last full day of our fishing adventure in British Columbia, and Shya had gone out early to fish before breakfast. The fire was crackling, the room cozy and within a half an hour or so, food would be forthcoming. I sat on the couch near where a conversation was in progress.

It was clear that Terry’s answer did nothing to assuage Mark’s obvious frustration.

Terry turned to me and said, “Mark and I have been talking. He’s trying to figure out why his catch rate is always in the lower 30% of all anglers here.”

This surprised me. I knew that I had caught the two largest Steelhead during the week, both over twenty pounds, so I realized that on some level I had been keeping track of how the others in camp were doing. But I had never thought to actually count how many fish I landed and to calculate my success or failure in relation to the other guests. To the best of my knowledge, Mark was a very good fisherman, who casted well – perhaps better than me. He had great equipment, perfect flies and had been in the game for years longer than I. But clearly my success had to include some skill sets that were perhaps hidden from both of us, since I had apparently been catching and releasing more fish than Mark, even with all of his experience.

Gazing into middle space, my cup cradled in two hands, I looked at what had contributed to my success. 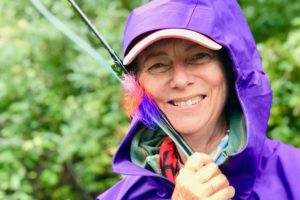 To begin with, I have discovered that being kind to myself is key, for if I am not, my negative attitude translates into a downward spiral of ineptitude. So I am kind to myself, regardless of whether or not I catch fish. Fishing is recreation. If it isn’t fun, I take a break and look for bald eagle feathers, or bear and moose prints left at the river’s edge. I take pictures of fallen leaves and caterpillars or tiny fairy mushrooms or the play of light through the early morning fog. Or I walk the bank in search of interesting river rocks and stones.

Also, I operate as if I am a novice, even though I am not, because I know that there are always things to be learned. When a question occurs to me, I’m not shy about asking my guide for ideas or coaching. I’m also adept at looking and listening.

Three days earlier, I had been on a stretch of water directly above the lodge. As I rhythmically worked my way down the run, I chatted with my guide for that day, Ethan. My cast was perfect, arcing out into the water, the fly unfurling, the swing even. Even so, I found myself thinking about two other anglers who were there that week whom I admired. They could cast a line half way ‘round the world it seemed. 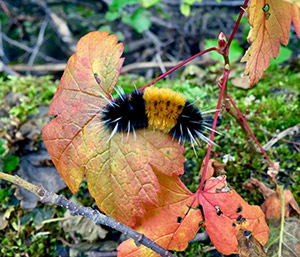 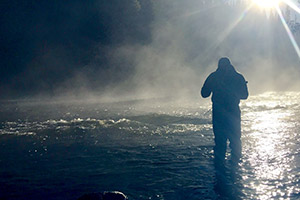 “Dave and his fishing buddy, Jeff, sure can cast a line.” I said.

“Yes, but they cast a little too far downstream for my taste,” Ethan replied.

Hmm, I thought. That’s interesting. I’d been afraid that my line had not been aimed enough downstream.

Ethan’s passing comment slid in, but at the time, I was primarily occupied with stepping down, casting, swinging the fly and stripping in – all the while watching and feeling for the bump of a fish.

The next day, I was with a different guide, Dan, on one of my favorite pieces of water. The weather was sunny and cool, the trees lovely, and happily I caught a couple of steelhead. But eventually, the speed of the current slowed significantly and I found myself struggling with how to make an effective cast. So I called Dan over to ask his advice.

“I don’t know how best to fish this,” I said. “The water is slow and I don’t think I am doing this right.”

“Well,” he said cautiously, “you may want to let the fly go a little more naturally here.”

Confused, I asked, “What do you mean?” 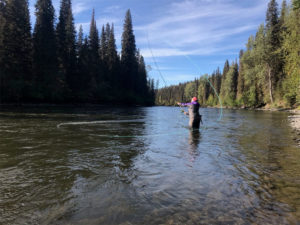 “When the water is moving like this, if you cast directly across the river, rather than downstream, the line sinks and the fly floats in a more natural way than it does on a normal swing and sometimes the fish see it better and really like it.”

“Okay, thanks,” I replied as I executed what he had suggested. Once again, to my surprise and pleasure, a few casts later I hooked a steelhead.

Later that day we moved to a new spot and after Dan dropped me off, he headed upstream to stand with Shya for a while. I stripped the line off my reel and looked at the water’s flow as I began to cast, sending a little more line out each time. Looking at how the water was moving as my fly got out toward the middle of the river, it seemed like it might be best to angle my line across again, rather than rely upon the standard downstream cast.

Perhaps a “natural” swing would be the ticket. I thought. So I gave it a shot.

Yet, even though I cast beautifully out across the water I began to question myself, not sure it was the right approach. I was just preparing to holler, “Hey Dan, do you think it’s slow enough here to cast across stream,” when – boom! My line when taut and the fish provided the answer. 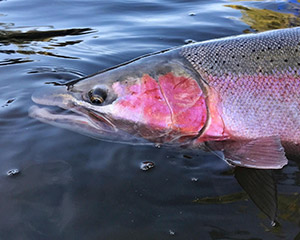 As I sat with Terry and Mark that morning, my coffee cup warming my hands, the smell of bacon wafting from the kitchen, all of those images and more came to me in the blink of an eye.

“Well,” I said, as I mentally unraveled the puzzle of what I may be doing “right” and what this other skilled angler may be missing, “The fish have been really soft in a lot of their takes. With a couple of them I thought I felt something but I wasn’t sure, so I waited, or I backed up a step or two and went again and was surprised that it actually was a fish. Then I haven’t set the hook, I wait until they take it and go. I’ve been very patient.”

“The other thing I learned this time was to cast across stream rather than on a downstream angle when the water is slow. I have heard that for years but this time it really made sense and worked for me.”

“What? That’s not right. All the books say to cast at a 45-degree angle downstream. That’s the best way to fish.”

Brushing off my apparently annoying input, Mark continued to converse with Terry as if I wasn’t there.

Quiet now, I reflected upon my experiences, the scenes rolling through once again. I could see why Ethan wouldn’t suggest to other guests that they cast more on an across stream angle as his coaching might be unwelcome to those experienced anglers. I could also guess at why Dan was cautious with his suggestions to me, as he had likely been rebuffed before also. And I could also see how it is easy to have a “problem” and not really want to hear others’ perspectives if the answer goes against what you already know.

Sometimes I judge myself for not being as educated as some when, in fact, I have a different kind of education than the book learning kind: I have trained myself to ask when I am unsure, to look and listen to what is being said, and then try out new ideas as if they are brilliant in order to test them out for myself. In that way, I get to have new experiences, not ones that are confined by what I have read and what I already know.

So nice to read! I ´m immersed in your fishing experiences and the talk, you had.