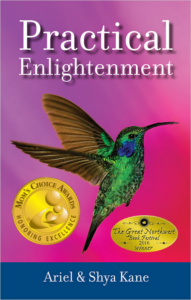 Click here for more information or to purchase this bookAlthough we had been good friends a long time ago, we hadn’t seen Eric in more than 20 years. It was the first time he had attended one of our Say YES to Your Life! evenings in New York City. He had traveled from Boston to attend our special event, Employee of the Year, a seminar devoted to discovering how to bring excellence to the workplace. There were many others attending for the first time that night – most were cautiously optimistic about what was possible, curious about what they might learn.

Eric came to the evening with a plan: Sit back and listen. He thought that would be the best way to approach the seminar since, to his way of thinking, he had nothing of value to offer. Thankfully, his plan failed. Here is what happened:

As we looked out at the faces, we could tell that people were looking for many different things but we felt fairly certain that everyone had an interest in being more successful, productive and satisfied at work. We also knew that most people have internalized standards that they unknowingly compare themselves to and many fall short in their own estimation. So we posed a question: “What attributes do you think embody the Employee of the Year?”

It was an exciting exploration. Many volunteered ideas – doing complete work with consistency, operating with passion, listening, being responsive to your colleagues and customers, as well as many other useful suggestions. Each attribute someone brought forward came to life as people passionately articulated how they felt and what they saw.

Suddenly, a man in the front row stood up. “I’m not sure what my idea of Employee of the Year was before I came in here tonight,” he said, “but being passionate about your job just leapt to the top of my list.”

The evening was heating up and, like popcorn, suddenly Eric blossomed and popped out of his chair to add his voice. “I live in Boston and New York City,” he told everyone, “and I take a really nice bus between the two that has an Internet connection. I had a plan this week to do research work via the Internet on the bus on the way down from Boston, but the bus broke down. First I was upset, but that didn’t make the bus move. Then I texted my complaints to my friends, but that didn’t make the bus move either.”

People chuckled as they relaxed into the evening and Eric’s story. He went on to say that he had been listening to our podcasts and had our first book, Working on Yourself Doesn’t Work: The Three Simple Ideas That Will Instantaneously Transform Your Life, with him. In an instant, while “stuck” on a bus, he had a direct experience of the Second Principle of Instantaneous Transformation: He could only be exactly where he was. That this was his moment. Complaining wouldn’t change the fact that the bus had broken down. So he quit complaining and got engaged, chatting with people around him, looking out the window. Eric grinned as he told everyone that he made a couple of new friends that day. He had surprised himself by entertaining those around him.

The evening continued and it was lively, informative and inspired as the diverse group of participants gave each other many gifts, simple stories such as Eric’s. At the end of the evening a young man named Bill who had been a silent observer over the course of the night approached us to say that he had been pleasantly surprised to discover that he wasn’t alone – that he’d been able to relate to all of the people who’d spoken. He let us know that he had been looking at improving the quality of his life for some time now but had felt like he was in possession of only fragmented ideas. Now it was as if those fragments unexpectedly and effortlessly fit together into a usable form.

“It wasn’t all new,” Bill said. “But suddenly I felt OK in myself. The best part was when that man Eric spoke about his experience on the bus. I really understood it. I saw that I can only be where I am – but it is up to me what I do with it.”

As we interacted with Bill, we couldn’t help but smile. Saying Yes to your life is so simple, yet the results are so profound. In a moment your life can transform and a whole new world, an entirely new possibility, is open and available.

We are so happy that Eric failed in his plan to keep quiet. His failure was a win, not only for himself but also for everyone, including a rather shy young man named Bill.

We know Eric came to the evening with the misconception that he had nothing of value to contribute. He had no idea that the spontaneous sharing of his experience would make such a difference. People absolutely underestimate what they have to offer. We pre-judge ourselves, thinking we are damaged or “works in progress” or that our “ordinary lives” are nothing special.

We love that Eric and many of the folks there that evening gave themselves permission to be self-expressive even if they thought what they had to say was not of use or at best “ordinary.” Each person’s “ordinary” is another’s “extraordinary.” Being one’s self and sharing that with others is simply a gift.