Life Will Provide if You Let It 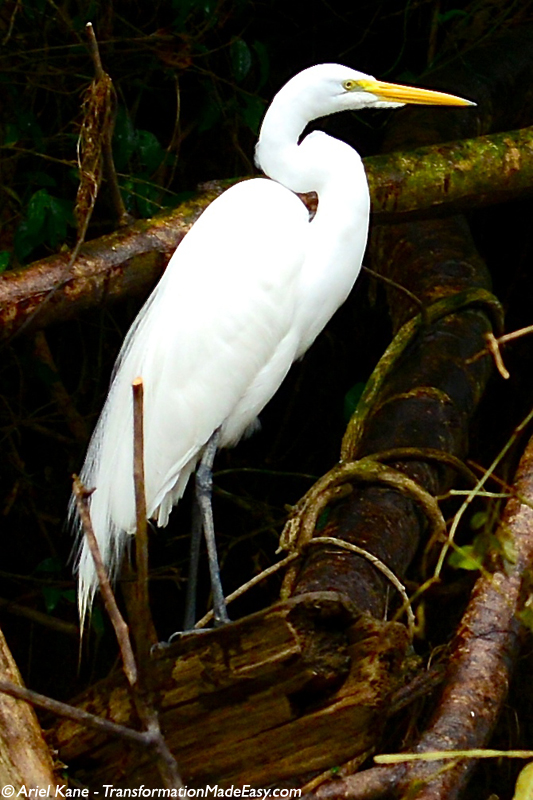 14 Aug Life Will Provide if You Let It

Posted at 10:59h in Articles by admin 0 Comments
Share

I like birds and I really like taking pictures of them. I must admit that I am partial to colorful birds – except not always. The frothy white feathers on a great white egret have been known to catch my imagination and the silhouette of a little hummingbird sitting quietly on a branch at dusk has held me in awe.

Not too long ago while attempting to capture the image of a bright bird with my camera, I had a surprising life lesson. I was keying in on what I wanted, on what I knew. All the while I had been missing something new and exciting by being focused on my desires.

Shya and I were at Caño Negro, a sleepy little village in Costa Rica that caters to nature tours, wetlands bird watching and tarpon fishing. We had been fishing for a day and a half on the Rio Frio where Shya had caught several tarpon, one being a giant, on his birthday. It was our lunch hour and Shya was tying up a few fishing flies for the afternoon; I had seen some scarlet-rumped tanagers by the dining room beneath a tree so I headed there with my camera in hopes of getting a shot.

Scarlet-rumped tanagers are a midnight black bird and as their name implies, they have the brightest of red on the backside. Their markings are very dynamic and I enjoy watching them in the wild. The hotel where we were staying had a bird feeding station and I had noticed them there but I had also seen them in a nearby tree that would be a much more natural picture.

As I drew near the feeding station, the tanagers darted up into a tree. While I could still see them, I knew it would be a really tough shot. The birds were dark, in the branches and leaves it was dark, and they were backlit by the bright, glaring light of day. Still I wanted what I wanted. The moment was arguing against it but I thought I should try. I focused down my lens and tried different settings to capture what I thought was my heart’s desire, dancing this way and that as they shifted position in an attempt to avoid me. So keyed in on getting “my shot” that I didn’t hear the man come up behind me.

I turned and saw one of the nature guides standing directly behind me. “How about that one? It’s a lineated woodpecker.” 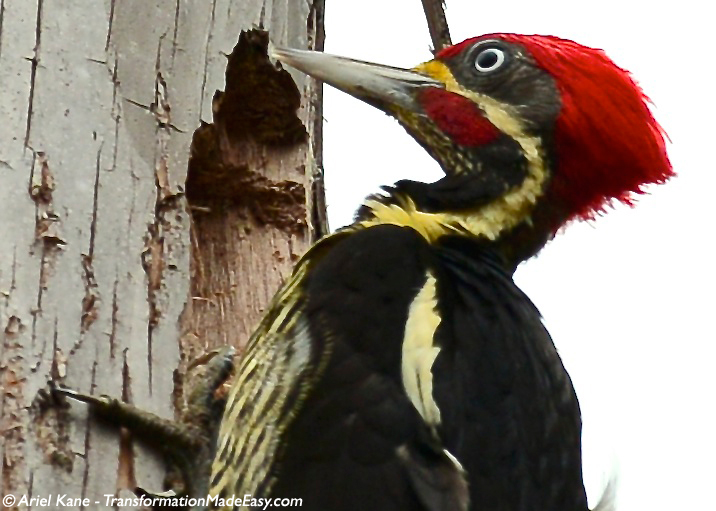 I swiveled my head to the left and on a tree was a beautiful bird. It was bright and interesting and to my delight, was easy to focus on. I gave the man my heartfelt thanks and he melted back into the dining area. For several moments the woodpecker enlarged the hole he was working on while I captured his image.

As I headed back to my room I had to smile to myself. It reminded me once again of how it is so easy to look for what we know and key in on getting the things we think we want, all based in the past. When focusing down on the known, we miss so many things. All it took for me was stepping back from my quest and listening to an expert. So sweet that that man pointed me in the right direction. Even sweeter that I followed his lead.