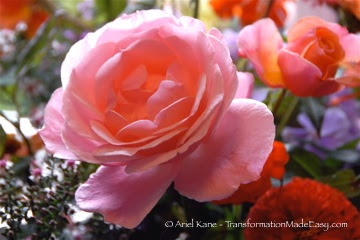 01 May Grandma’s Pocketbook by Ariel Kane

I grew up in Gresham, Oregon, which at the time was a rather sleepy farming community where the children picked berries as a summer job and went to Rexall Drug store for ice cream floats with the money they earned. Our house was a two story white structure on the edge of the woods with a separate garage and a little playhouse that was perfect for my sisters and me.

On the top floor of our house, off my sister Cathy’s bedroom, under the eaves was an attic space where my folks stored Christmas decorations, luggage and things that were out of season. One of the treasures that was kept in the attic was my Grandmother’s purse. Grandma, my mother’s mother, had died long before I was born. Ila May Powell was born in 1906 and lived much of her life near Portland, Oregon until her death in 1957. She had met my Grandpa, Larry Halif Cermack, and after they eloped she eventually went on to have 8 Kids – my mom being the oldest.

One day when I was young, I remember that my sisters and I were playing in the attic and we came across Grandma’s pocketbook. It was black with a single strap and had a simple gold clasp at the top. We carried it out to Cathy’s bedroom, climbed up on her bed, sat cross-legged facing each other and we carefully removed the contents one piece at a time. Inside was a comb, a crochet hook, a clean white hanky with tatted lace that she had made herself, a coin purse with a few coins, a pencil and a small, handwritten, shopping list: Butter, eggs, coffee, milk.

Gingerly we removed the list and marveled at the writing thereon. It was wonderful to see something Grandma had held in her hand that she had actually written. All these years later I remember that list. And I also remember something else: Grandma had things left to do on the day that she had died. I have always been touched by that fact in ways that are hard to describe. She had a full life. She did many things. And yet she apparently had things left to be done. The reality that she didn’t do these things didn’t make her life incomplete, nor did she fail in any way. Somehow the fact that she still had a grocery list on the day that she died has allowed me to be relaxed about the desire to get things finished or over with.

It is so easy during our lives to press to get everything done. Most people feel pressured to complete everything on their list by end of day. Many feel that they have failed if there are tasks yet to be accomplished, goals yet to be achieved. But for me, I have come to realize that no matter what my age, no matter what my health, no matter what the circumstances, I am likely to always have a list. It is a component to being alive. So at the end of each day, I can put away my list and let myself be. If I am taking a day off or going on vacation, I can let go of that list, for it will be there when I return. “Finishing” something, completing my list of “to dos,” crossing that finish line is not a final destination. Having a list of projects and “to dos” is simply a part of living life.