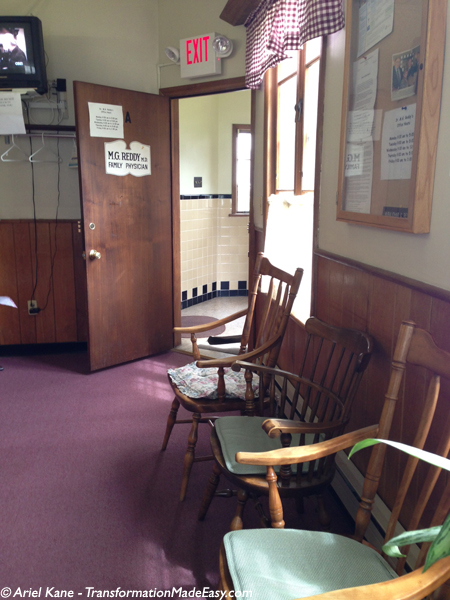 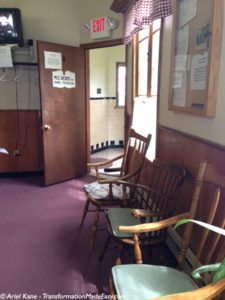 Have you ever noticed how the attitude with which you approach life influences your experience of your day and can impact the way others around you go about theirs? I once had a sweet reminder of this that had me quietly smiling to myself as I went about my day.

It was a frigid Tuesday morning in winter and my husband Shya and I had a routine appointment with our country doctor. His office is a small country affair, which looks like it belongs more in a rerun of Mayberry RFD (a television show about small town Middle America that aired from the late sixties to early seventies) with Opie and Aunt Bee than it does in modern day America. One would not guess at first glance that this doctor was one of the most caring, comprehensive and progressive doctors around. Not only is he an internist, practicing at the local hospital, but he also practices homeopathic and Ayurvedic medicines.

However, this physician is famous amongst his patients is being chronically late. We have encouraged many friends to see him but we always warn people to plan to be there for an extended period as his schedule is rarely, if ever, on time. We plan for it as well. It is part of the culture of his office. When weather permitted, we took a walk before our appointment. Arriving on time, we signed in, gave Nurse Nancy our cell number and she called us when he arrived. This allowed us to stroll over a nearby bridge spanning the Delaware River between New Jersey and Pennsylvania where we watched carp and bass and at times, shad swim down below. Snow geese frequented the shores and it was a pleasure to watch the seasons as they changed.

We also have planned in advance to be the first patients of the day as we have come to recognize that the doctor’s schedule often gets further delayed; he does not rush to get his patients done with, is really there for each one and sometimes that takes more than the 15 minutes allotted and sometimes he is delayed at the hospital due to an emergency or at the local retirement community where he is their physician on call. I have seen him on mornings when he is bright and chipper and have also seen him directly following the death of an elderly patient whom he had been treating for years.

Normally, I expect a doctor to be pretty much on time as, in my opinion, it is respectful. But with this physician, I have come to realize that if I wish to see him, it comes with his rhythm and his lack of timeliness. I then have one of two choices – surrender or complain. I choose the former. This means that Shya and I not only plan for our appointments to generally start far later than the scheduled time but also that we treat it as if this is exactly what we want.

On this particular Tuesday morning, we were called in to see him approximately an hour after our appointed time. I had been quite productive whilst waiting that day and had finished most of my emails as I had been sitting there. When the doctor touched my arm his fingers were inordinately chilly.

“Wow, Doctor, your hands are really cold this morning!” I said.

“I spent a long time in my car in the parking lot talking to the family of a patient,” he replied quietly.

While he said nothing further I imagined I heard pain in his voice. For certain the discussion he had had was a challenging one, one that truly mattered to whomever he was conversing with. I knew in an instant that he had been compassionately guiding a family through a difficult time.

Shortly thereafter I returned to the waiting room to collect my things and my coat and hat. The room, as usual had a host of patients, most of whom were obviously retired. As I removed my belongings from a chair next to a gentleman of advanced years I smiled and told him that the doctor was in now and he had just seen us so it shouldn’t be too much longer.

“How long did you have to wait, only about 8 hours?” the man asked only half in jest.

I leaned in as I retrieved my computer, which was sitting on the floor near his chair, “He was delayed in the parking lot while talking with a patient’s family. If it were my family he had been talking to I am sure I would have been happy that he took the time,” I softly said.

It was still cold outside and it took a few moments for Shya and I to don our vests, coats, scarves and hats. As we were doing so, Nurse Nancy called the gentleman with whom I had just had the exchange but he turned to the lady sitting next to him and said, “Why don’t you go first. I have the time.”