By Eric Ruben
Home > Enlightenment  > What? Oh No! Now What? 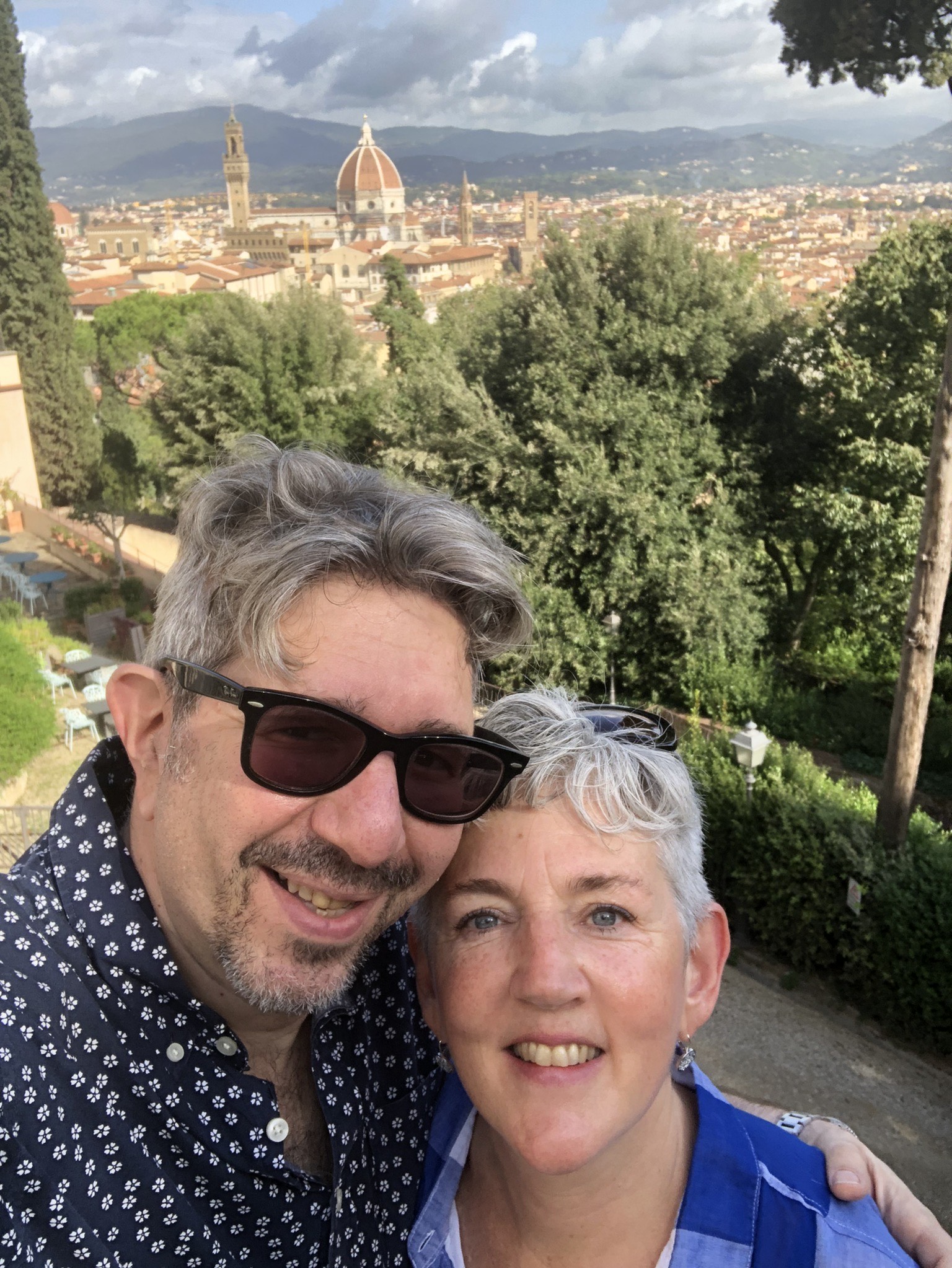 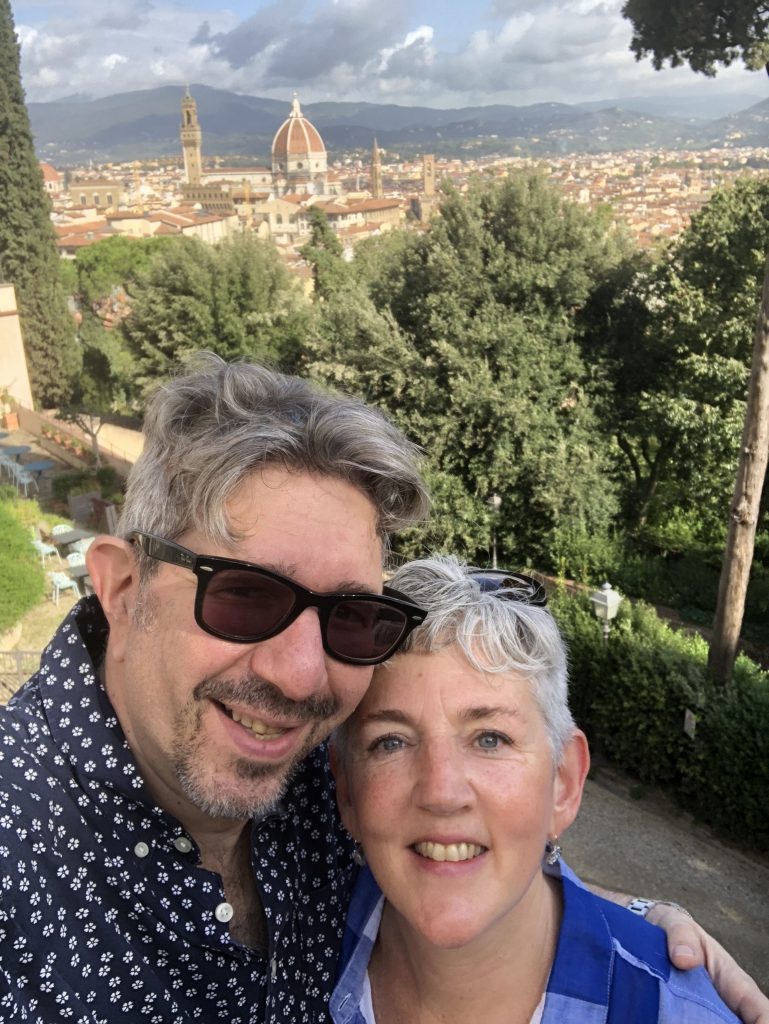 It’s hard to believe that it has been more than three years since I got the call from my wife Holly who was on the West Coast visiting her mother. She telephoned from the emergency room to let me know that she had gone blind in one eye and the doctors said she had a brain bleed. Shortly thereafter, as I scrambled to get from Brooklyn to California, they discovered my beloved Holly had a brain tumor – which thankfully was ultimately determined to be benign. Five operations and the surgical implanting of a shunt later, Holly is vibrant and well.

Although Holly’s tumor is benign, it doesn’t mean it’s a good thing  – the growth still takes up space that it shouldn’t. Benign just means it isn’t cancerous. With the support of our doctors we have learned to approach the tumor as a chronic condition rather than imminently life-threatening. As part of her regular care, Holly has an MRI to scan for growth or changes every three to four months. Thankfully, each MRI scan, and subsequent consult with her doctors, has been uneventful. At least it was until this last visit.

In our last visit to the hospital, her neuro-oncologist (a brain specialist who deals with cancers and unknown growths) who we’ll call “Doctor First”, met with us and shared a concern. He reviewed the scans going back for several years and he believed there had been some growth of the tumor over the years. While currently insignificant, he was concerned that continued growth over time, even at this small rate, could be extremely dangerous and we should discuss the possibility of another surgery with Holly’s brain surgeon (“Doctor Second”). He wanted to see if we could get a new piece of the tumor and analyze it to determine how best to treat it.

I was holding Holly’s hand when Dr. First gave her this news and although she appeared calm, I watched the color drain from her face. I broke out in a sweat as I quietly screamed in my head,

Oh no! Not another surgery. What if…

Back when Holly had her previous surgeries, although the biopsied brain tissue was reviewed by the most renowned laboratories in the country, the type of tumor could not be identified. The good news is that it’s not aggressive, has not spread, and is not known to specialists as a “bad” tumor. But what was troubling to Dr. First is that, since he doesn’t know what it is, he doesn’t know how to treat it. His entire and very successful career is based on being able to diagnose these kinds of things and then treating them with the right drugs or radiation. If he doesn’t know the cellular makeup of the tumor, radiation might be great and shrink it, or it might make it grow.

As I listened to him, I realized Dr. First wanted only the best for Holly. His desire to heal and cure was profound and sincere. However, neither Holly nor I wanted any more surgeries for her unless it was absolutely necessary.

Setting aside our reaction to the news, we listened attentively to Dr. First, even though his message was not what we wanted to hear. At the end of the consultation, we thanked him for the information. Then, without delay, Holly made her appointment to see the brain surgeon: Dr. Second.

I’m proud of Holly. Dr. Second’s next available appointment was three (potentially long) weeks away. Rather than spend every moment leading up to it in some kind of frightened state, we took walks, we worked at our professions, were intimate, and occasionally we shared with each other our concerns about her health and our future. Most importantly, we listened to each other and got back into living our lives, fully engaging with what was right in front of us.

The three weeks passed and then we had our Zoom conference with Dr. Second. He’s an amazing brain surgeon. In my mind, that meant that he would probably recommend doing the surgery, but I kept an open mind and focused on him and what he had to say. When he spoke, the doctor shared that he saw nothing to be concerned about. He reviewed the same MRIs as Dr. First, but his interpretation was that there wasn’t any growth over time. Additionally, he saw the risks of surgery as high and the benefits as low. To quote him, “If it ain’t broke, don’t fix it.” Even though he excels at performing surgery, to him, Holly’s lack of any symptoms or illness and the lack of any noticeable change in her tumor meant the best course of action was NOT surgical. His advice? Watch, wait and see.

We now had two experts, both with the best intentions and absolutely opposing ideas about the best course of action. Now what?

Ultimately, Holly realized that she is in charge of her well-being. Of course, she didn’t want another surgery. But she was able to put aside that sincere wish in order to really listen to both experts. As she (and we) really listened to hear what was being said without agreeing or disagreeing with their perspectives, Holly found her truth. It included knowledge and personal desire and also her intuition. The course of action Holly chose is to closely monitor the tumor with MRIs and if it changes, she will take further action.

For now, Holly and I are gratefully living our lives as fully as we can. I have found that no matter the circumstances, joy is available every time I let go of thinking about a future that may never happen.

Author’s note: I originally wrote about Holly and my journey with her brain tumor in a chapter called Seize the Moment, Life is Full of Surprises, which was included in the book, Being Here…Too: Short Stories of Modern Day Enlightenment, by Ariel and Shya Kane. If you want to discover how to be present and centered, regardless of the circumstances, Holly and I highly recommend the Kanes’ books as well as their Living Made Easy virtual seminars, via Zoom. Their transformational approach to life and listening has been invaluable. To find out more visit: TransformationMadeEasy.com

Wishing you both continued enjoyment of life. Thanks so much for your generosity. I can feel your outlook healing. Happy #WorldBrainTumorAwarenessDay #worldbraintumorday !

Thank you, Eric, for this beautiful article! Such an inspiring reminder of the power of listening and living in this moment! Love you both!

Thanks so much for sharing this! Eric, this is a beautiful and inspirational article, which provides great examples of listening and how to be present during turbulent times.

Thank you for sharing this empowering story of truly listening and living in the moment (and not in fear). May Holly‘s and your future be filled with best of health and loads of laughter, happiness and love!

Thank you both for sharing so openly about your experiences and guiding lifesharing philosophies.
It is truly crucial to be fully present in each moment.
Finding the calm and joy and celebrating the preciousness of each moment is so important.
It is reassuring and reaffirming to read this having recently had my brain aneurysms checked, having Kirk recuperating from his nephrectomy to become a living kidney donor and me being placed on the potential recipient living donor kidney transplant list in addition to the deceased donor potential kidney transplant recipient list.
Kirk and I are planning a little Massachusetts weekend bed and breakfast and old family homestead area getaway for his birthday while he is still recuperating from his surgery., I am recuperating from a fall and I am hoping for my kidney transplant surgery to be able to happen soon.
We are planning a slow paced nearby weekend to soak in some relaxation and healing and learn a bit more about some of his family’s history up in these parts and celebrate love, togetherness, lifesharing and how each moment can bring happiness, health, joy, love and peace.
We’ll be thinking of you and Holly and hoping and praying for happiness, health, joy, love and peace for all❣

So very glad you are experiencing wellness and practicing equanimity. Both qualities look beautiful on the two of you.

Thank you Eric and Holly for so generously sharing your experience. Inspired by you and love you both!

Beautiful and Inspiring!
Thank you Eric and Holly for sharing your message with the world!!