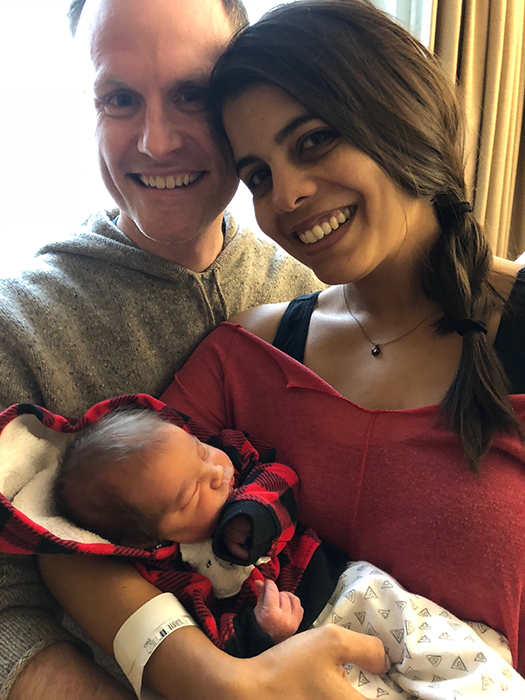 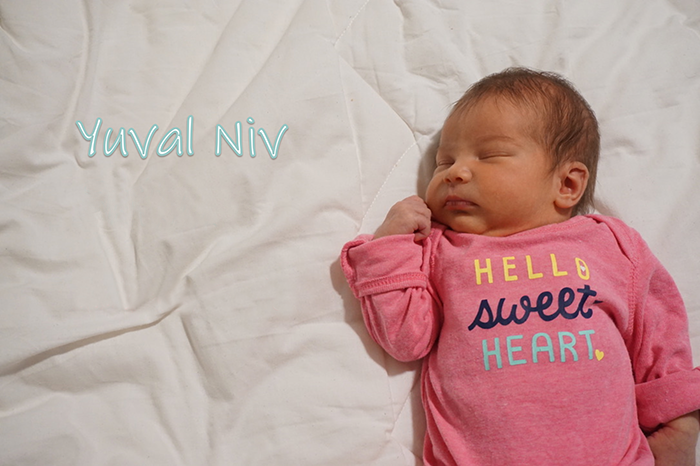 We are so excited to officially welcome Yuval Niv as the newest member of our family and to introduce her to you all–our dear community of family and friends!

The Story of Yuval’s Name:

In Hebrew, Yuval means brook or stream. Our shared love of the outdoors inspired us to choose a name that would connect our daughter to the beauty and serenity of nature. In the bible, Yuval is the first musician ever mentioned. While we’ll give Yuvi a few years before her first festival (maybe), we also love that her name connects her to one of her dad’s passions.

Yuval is also the name of the town, Kfar Yuval, in northern Israel where Shira’s maternal grandparents moved when the family emigrated from Cochin, India to Israel. Kfar Yuval was the site of the tragic attack that took the lives of Shira’s aunt and uncle. With the name Yuval, we honor our daughter’s Cochini (Indian-Jewish) heritage, and we also honor the memory of her great aunt and uncle.

We chose Niv as Yuvi’s middle name because it is both an Irish and a Hebrew name. The Irish name, traditionally spelled Niamh, means radiance or brightness. In Hebrew, Niv means speech or communication. We love that this name combines the rich histories on both sides of Yuvi’s family, and hope that her speech and conversation have the power to bring light and radiance to the world.

We were discharged from the hospital on Thursday, November 15th. Like many New Yorkers, we hit the road and experienced a shockingly difficult journey home in last month’s nor’easter, the first winter storm of the season that brought with it record snowfall in NYC, strong winds, ice and treacherous conditions. While Shira’s dad Jeff cautiously inched us forward in the snowy gridlock, Andy, experienced in driving in snowy conditions as a New Englander, helped various drivers by restarting cars and driving challenging uphill stretches for them. After several hours in these conditions and calls to 911 and the local precinct in Washington Heights (which was as far as we got on way back to the Bronx) that confirmed how difficult/impossible it would be to get emergency help getting off the roads, the situation started to seem a little dire. That was when Andy encountered Ian carrying grocery bags. Assuming Ian lived nearby, Andy asked if his wife and newborn could come inside for a bit so that Shira could have some time to take care of the new baby indoors. After Andy met Ian, a scary set of circumstances completely transformed into a fun, warm (both literally and figuratively), and comfortable evening. Ian and his fiancé Kelly welcomed Shira and the baby, Andy, and Shira’s parents with open arms. They ventured back out into the storm on multiple occasions to help Jeff and others make progress on the roads and get themselves and their cars to safety, cooked the whole family dinner, and set us all up to get some sleep while the weather and the roads cleared up overnight.

In the end, Yuvi spent her first night out of the hospital sleeping soundly in the arms of her parents, surrounded by family, and in the company of amazing and compassionate new friends–happy, healthy, and blissfully unaware that anything hadn’t gone according to plan.

This Thanksgiving, we were filled with so much gratitude for everyone who helped us bring Yuvi safely into this world, for our families who have supported us through this and every experience, and for the kindness of strangers who helped our daughter’s life get off to a great start on a wintry November day. While we could never in our wildest dreams have imagined the circumstances of Yuvi’s big adventure, we are completely inspired by Ian and Kelly’s openness and generosity and truly can’t imagine a better start to Yuvi’s life in the outside world.

With love,
Shira, Andy, and Yuvi