The Kitten Chronicles: The Terrorist

07 Sep The Kitten Chronicles: The Terrorist

The assault started sometime after 3am. Baby wanted to play. She no longer permitted the lazy scratch behind the ears while she purred and she ceased being content to patrol the ridgeline of our bodies as we attempted to sleep on our sides. By 4am our kitty shaped alarm clock wouldn’t let us engage the “snooze button” – she had moved on to being the equivalent of a tornado warning siren. She began using any hand exposed outside of the covers like a chew toy. Baby was a nose nibbling, dive bombing, grab and dash force of nature. Like her own personal early morning obstacle course, she would leap over one of us to land on the other. Think of a comic book illustration where the character exclaims, “Oof!” from a fist to the stomach – or in this case four paws and 5 pounds of cat pouncing on a belly.

This couldn’t go on. We didn’t want to reward her behavior by feeding her or getting up and playing and we certainly couldn’t just bury our heads under the covers to wait until her assault was over. By mutual accord, the two of us grabbed our pillows and moved to the guest bedroom (now dubbed the quiet room) and shut the door.

“Oh No!” or the equivalent was her reply. 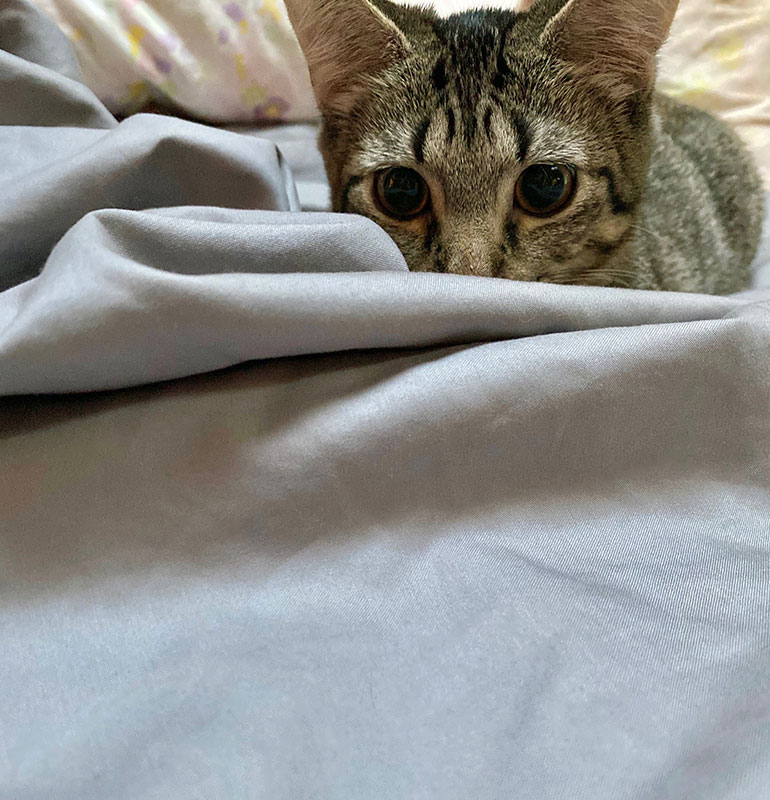 Desperate mewing (she rarely if ever mews – she usually churrs in delight), scrabbling to get in, thrusting her paws frantically below the door trying to get purchase. Yes, Baby was now having a full fledged “teenage” hissy fit. What was cute with a kitty had now turned untenable in a young cat. Just imagine what it would be like in the dead of night, when suddenly five pounds of kitten leapt on you from a distance while you are sleeping and entirely unprepared.

As Baby cried pitifully, trying to gain entrance, we covered our heads, waited her out and fell back to sleep. When we ultimately emerged, she was much more subdued. We could swear she was being careful around us for the rest of the day.

Now we have a new system. Just before sunrise is Baby’s natural time to get up. In those wee hours of the morning she is proactively intimate with us, purring while actively rubbing her head under our hands. She revels in burrowing in beside us or on us, her purr a deep and soothing vibration. Eventually, as we feel her energy shift from snuggly to playful, one of us will scoop her up and take her to the kitchen, stopping for her food bowl along the way. The reward extended to the early riser is more purring and winding through legs and head bumps and love as Baby is getting fed.

Even with dry kibble left out overnight, by morning she truly is ravenous. So now we feed her in her own quiet room and shut the door. This room has her litter box, food, water and a toy or two. When we ultimately get up and open that door once again, instead of being angry or upset, she is oh-so-happy to see us and seems to have been content to be on her own for an hour or two…or even three.

Being with our now adolescent kitten, soon to be cat, isn’t without the occasional bump but it is most always amusing. Between the three of us we are learning and growing and meeting whatever comes next.

I love this!! I too, have early morning “sleep interrupters” (more human than feline- but definitely similar) and I love how you guys found an awesome solution!