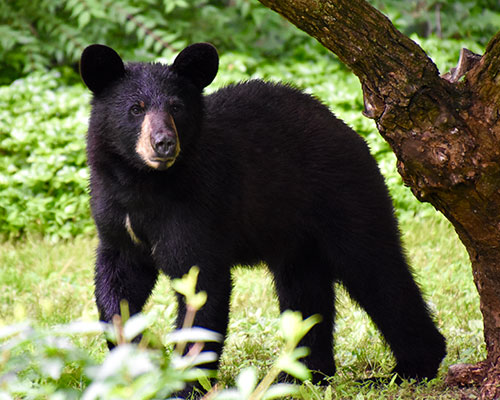 Posted at 00:00h in Enlightenment, Success by admin 2 Comments
Share

When the bear showed up in our yard, it tried to find a way past the electric fence that guards our bird feeder. Spying it from the window, I called for Shya and grabbed my camera. Quietly opening the door to our deck, we stepped outside. The bear was a youngster but still formidable, weighing in at somewhere over 100 pounds. Trying not to frighten it while attentively looking around in case its mama was nearby, I lifted my camera and began to capture the young bear’s image. After it hid in the ferns, then scooted behind a tree, it ultimately ambled back off into the woods.

Elated by having seen something so wild and so rare right in our own backyard, we went back inside. That’s when we heard the rumbling: Baby, up on her window perch, fur up, bottlebrush tail, was a growling, menacing wildcat.

Amazed, we reassured her that she was fine and we were fine, all the while whispering to her what a brave, brave Baby she was. That bear was huge in comparison and Baby had been fully ready to take it on.

Was she running on instinct? Could she smell it? It wasn’t close to her window so we were mystified at how she knew this bear was an intruder that needed to be repelled.

We may have gotten the answer to that question the following night. Getting ready to make dinner, Shya stepped out on the deck and removed the grill cover. Glancing down, he noticed that the grill’s aluminum drip tray that catches grease was sparkling clean.

“Ariel, did you wash the drip tray?” He asked.

“Ahh, so maybe Baby did see the bear up close and personal since it has been licked clean.”

“That cat really does have a secret life!” I remarked.

Baby is so brave.

That is one brave Baby!

What a sweet story!!! Thank you so much!