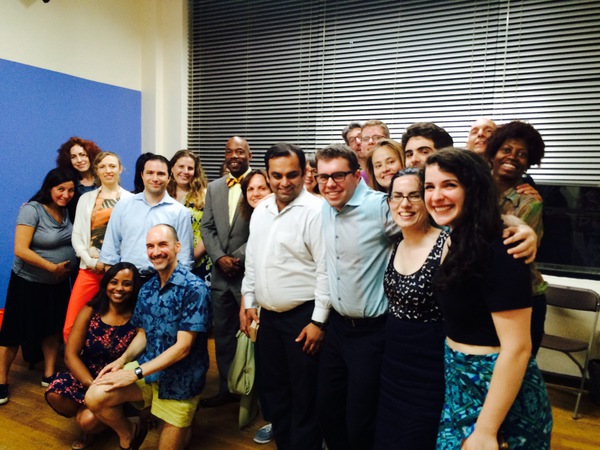 When our friend Colleen asked us to lead a Say Yes to Your Life! Meetup in June, we quickly replied, “Yes!” Ariel and Shya Kane lead seminars called Monday Night Alive! on most Monday nights in New York City, but when they are out of town, many people who regularly attend the seminars host a Say Yes To Your Life! Meetup, which can be found on Meetup.com and Transformationmadeeasy.com. There are Say Yes to Your Life! Meetups located in many cities, including Manhattan, Brooklyn, Montclair, New Jersey, Kansas City, Colorado, Minnesota, and abroad in England, Germany, Switzerland, Denmark and Australia.

Many people showed up to the meetup, including several who had never been exposed to Transformation or Ariel and Shya before. The topic of our meetup was “Ignite Your Passion.” It was so much fun! We spent the evening talking about living a passionate life and becoming aware of the things that kill our passion, such as comparing ourselves with others and trying to get “somewhere.” Quickly into the evening, it became clear that passion resides in the current moment, and not in some future that may, or may not, occur.

The people who attended the meetup were brilliant, including many newcomers, who posed excellent questions. One particularly exceptional question was, “What does Say Yes to Your Life mean?” When this question was asked, many of us took a look at what “Say Yes to Your Life” actually meant. People then chimed in with different expressions of what “Saying Yes” meant to them, such as becoming aware of how much one complains, or allowing themselves to be exactly as they are. It was great to hear everyone’s own experiences of “Saying Yes” to situations and circumstances that were real and tangible, and how this seemingly simple concept has had a significant impact on their lives, as well as the lives of the people around them.

Thanks Joe & Candace for sharing this! It is inspiring reading your experience of the evening.