Life on the Ledge – It’s a Matter of Perspective 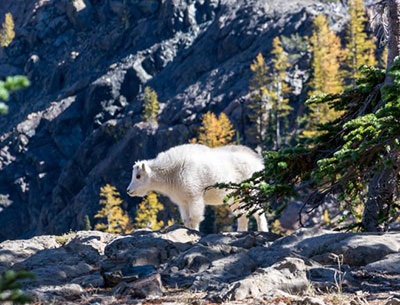 As our flight lifted off from the helicopter terminal near Smithers, British Columbia, I watched the ground recede out the window near my feet. Having called “dibs” I was happily strapped into the copilot seat on the left front side of the bird. Shya sat in back with two other passengers who were also en route to the Babine River for a week of steelhead fishing. As suggested by the pilot, we all donned headsets and positioned the microphones close to our mouths so that we could communicate with each other during the twenty-minute flight. The headsets crackled to life, hissing and popping with voice-activated static as I said, “I hope to see some sheep this time.”

This was our third trip to the Babine River and in previous years, others who had made the flight had reported seeing bighorn sheep and other wildlife.

Shya chimed in. “Or moose or a bear.”

“Yes, something.” I replied.

The sky was blue with the wisps of cloud and it was smooth sailing. As we crested the mountains at 6500 feet the pilot spoke up.

“There,” He said as he pointed to a white speck on his right. “It’s a mountain goat.”

As we closed the distance, the nanny goat came into focus and I saw that the animal had been resting, legs folded under her on the edge of the peak. Hearing and seeing us coming she climbed to her feet and surveyed her options – move down the mountain with the somewhat gentle slope at her back or step off the other side, straight down the sheer cliff face. Without hesitation that goat stepped off into thin air, landing on a tiny, and to my eye, imperceptible ledge below her. It was a lazy move, unhurried as if she were stepping off the curb of a sidewalk. I suppose for her it was as normal as it is for me to cross a street.

As we flew on and she became a distant speck once again, my mind danced back to an experience I once had in New York City. Shya and I had been waiting to cross the street in front of Bloomingdale’s on Manhattan’s Upper East Side. While waiting for the light, we stood with our toes dangling off the edge of the curb. It was a comfortable moment and we were at ease in ourselves. And then Shya had a thought and said to me, “Ariel, look down and see our toes.” I did as he suggested, curious but not seeing what in particular he was directing me to look at.

“But imagine that we were 10 stories up or perhaps 50. Our legs would be no less capable. We would be no less stable, but we’d likely find it quite frightening. The apparency of danger would stimulate wobbly knees and an adrenaline rush!”

Closing my eyes it wasn’t hard to imagine standing high up over the street with my toes hanging over the edge of a precipitous drop. Of their own volition, my eyes popped open and I looked at Shya with a grin. In an instant I had created a climate of fear and danger where none existed.

Sometimes when I start a project or when I am preparing to do something new and challenging, I have the thought that I am not up to the task, that I don’t know how to do it, that it (whatever it is) will be difficult to do. But I have come to realize that, like that nanny goat, I am built to step off that ledge into the unknown, into what’s next and my footing will be sure – even if I am stepping onto the smallest of ledges. I have come to see that investing in being afraid or seeing myself as capable is all a matter of perspective.