An Excerpt from Being Here: Modern Day Tales of Enlightenment
Home > Articles  > Finding the Balance Point 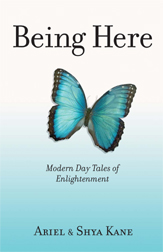 Posted at 00:00h in Articles, BH by admin 0 Comments
Share

Most people aim to live in a way that produces a sense of well-being, satisfaction and accomplishment. We are all interested in being productive and achieving the goals that are consistent with our values. However, the two of us have often observed that in the desire to attain their goals, people often lose sight of what is happening in their lives…in each moment. People are driven to accomplish what they think will produce happiness, success and well-being and miss all that life has to offer when you are Being Here.

We are not suggesting that you should not have goals. It is simply that focusing on future goals will rob you of the richness of this moment.

Here is an example:

Since we are both avid fly fishers, we took a short vacation after one of our winter seminars in Costa Rica, where we set out to catch large Pacific sailfish on fly rods. There we hired Captain Bobby, his boat and mate to take us off the Costa Rican coast in the blue Pacific in search of these majestic creatures.

Each year, for the previous four years, we had fished with Captain Bobby. When we first met him, he was working for a fishing lodge as one of their premier guides. We seemed to get along well together, so we continued to book trips with him after he went into business for himself.

It was just Bobby, his mate and the two of us, on a 26-foot boat, heading off shore for an adventure near Golfito, Costa Rica. There is something about the intensity and immediacy of life at sea that fascinates and feeds us.

Each day began at dawn as we motored away from the small village nestled next to the rain forest and out between the arms of land that guard Golfito. As we headed out to sea, we always encountered something vital. There were majestic trees on shore that burst into purple blossoms and the fragrance wafted out on the breeze. We often came upon giant schools of dolphins that jumped and cavorted, swimming in front of the bow of the boat, a marine vanguard of some of the most intelligent creatures on the planet. There were big gray ones, sleek and powerful, effortlessly gliding, gracing our craft with their presence, elegantly taking turns leading us to wherever our bow was pointed. There were also the spinner dolphins that treated us to aerial acrobatic displays as they jumped and spun, twirling in apparent delight before splashing back into the sea. The spinners are often accompanied by yellowfin tuna and they work together corralling and feeding upon the schools of small baitfish. You can see this group from a long distance. It is a frenzy of glistening water, leaping shapes and a raucous cloud of diving seabirds.

Sea turtles are more sedate. They poke their heads above water to watch the world go by. Occasionally, we have had a spectacular view of whales, up close and personal. On one particular trip, we saw a mother and her calf speeding toward the distant shore. They leapt and dove in tandem on a path parallel to our boat. For some time we kept pace with these giants.

Manta rays do back flips, frigate birds soar high on the thermals and pelicans fly in formation inches above the waves as they catch the updrafts. And then, there are the big game fish, dorado, Pacific sailfish and marlin. The dorado are golden, blue green bullets that streak from the deep to attack the lures that are trolled behind the boat. Sailfish materialize, thrashing about as they attempt to stun the bait with their beaks, so that they can have a leisurely feed. And the marlins are the kings – creatures without equal. These amazingly powerful and aggressive goliaths emerge from nowhere at full fury; suddenly the deceptively passive skin of the water erupts as something the size of a small car explodes into view.

Sometimes on one of these trips, we have come upon a log, floating like a solitary world 20 or 30 miles from anything, a whole ecosystem unto itself. Birds sit and rest. Crabs and shrimp-like creatures scuttle on its surface and below, in the shadow of the log itself, descending layers of baitfish circle and feed upon the smaller life forms. The dorado, sailfish and marlin can lurk just out of view waiting to pounce.

So our “fishing” expeditions are immersions into the life and grandeur of the sea. Each day on the water is a gift, full of sights, sounds and smells that allow us to get back in touch with nature and the vastness of life on the planet.

You would think that being a fishing captain would be a very fulfilling way to lead life. But Captain Bobby was blinded by a revolving set of goals. When we first met him, he would complain about the management of the lodge and say, “If I had my own boat, I would do it differently. I would do things better than they do.”

On this particular trip, Bobby had finally accomplished some of his life long ambitions, including getting a boat of his own. His current goal, which he enticed us to be a part of, was to capture a world record sized fish on a fly rod. Bobby was very interested in Ariel becoming the new women’s world record holder for Pacific sailfish and so our days included attaining this goal. It became an exciting adventure to hunt for big game, hoping to catch one that was the biggest ever recorded. One day, Ariel caught that big fish. It was truly a giant. A grizzled beast weighing well over l00 pounds, almost 10 feet long from tip to tail.

We had won. We had accomplished what we had set out to do. The euphoria lasted almost an entire evening. Then the trouble began. Bobby had met one of his own personal goals and so it was on to the next one with a fervor and intensity of purpose. What we discovered was that he was no longer just fishing and enjoying the wealth of experience to be had on the ocean. We were now fiercely directed into “must get another world’s record” as if the attainment of this goal would produce some sense of real and lasting satisfaction.

A few days later, Ariel caught a world record size roosterfish. That night at dinner Bobby let us know that this was one of his four life goals. Things after that went from somewhat bad to worse. He became irritable, easily frustrated and quick to anger. Now we couldn’t do it right enough for him, nor could we catch a big enough fish, fast enough. Fishing became serious business. No more “Mr. Nice Guy.” We talked to him about this, of course, since it was not our idea of fun on vacation. He wasn’t so open about his frustration during the rest of the trip but we could see it seething just below the surface.

Bobby had gotten lost in the idea that attaining the next goal would somehow fulfill him, validate his existence and make him a happier person. The problem with this idea arises when you actually attain your objective. Life is not fundamentally changed by achievement. And so the accomplishment of a goal, under these circumstances, does not produce a sense of well-being or satisfaction.

Having goals can be extremely useful but not if they are attained while sacrificing your experience of living in each moment. If you are worrying about the future and the production of goals, you cannot be engaged in what is happening in this current moment in your life.

Our fishing story is a prime example. Catching big game fish requires more than just the angler’s skill. It is a team effort and having a mutual goal kept all of us focused and gave meaning and purpose to our actions. Mistakes were minimized because we brought all of our attention and ability to the process of catching fish. But there is a balance point. Focus is a benefit, but if you are off in the future, expecting the outcome to produce long-term happiness or satisfaction, you miss the magic of the moment and life becomes serious and two-dimensional.