Dinner with a Stranger

By Ariel Kane
Home > Articles  > Dinner with a Stranger 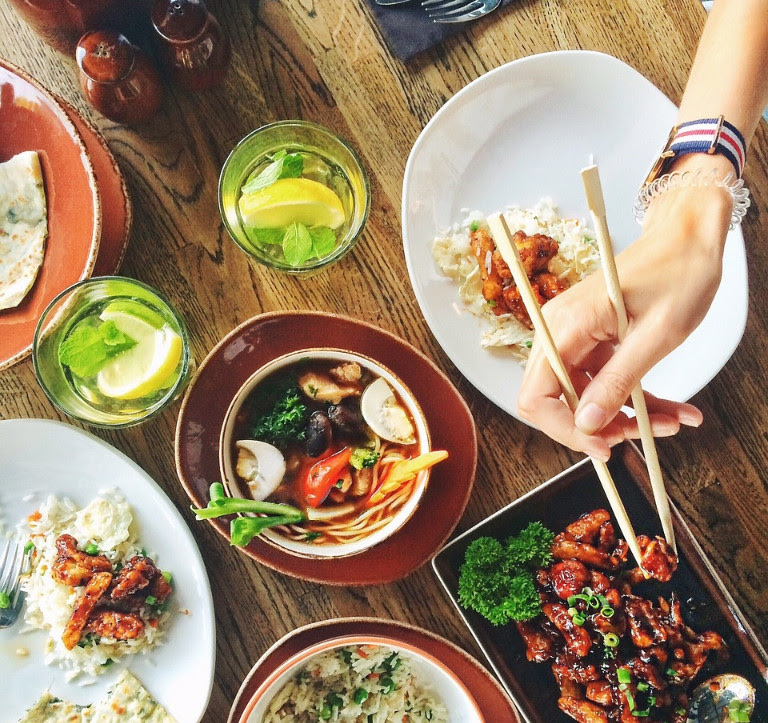 01 Jan Dinner with a Stranger

It had been years since Shya and I had eaten at an Ollie’s Noodle House. In the 80s and 90s we used to go to Manhattan’s Upper West Side to eat there. In those days we would make a special trip to have General Tso’s chicken or jumbo shrimp, a crunchy fried delight with a semi–sweet hot sauce, on a bed of bright green broccoli. Sometimes we would even bring Shya’s parents there, when they were still alive, to celebrate special occasions. Eventually that restaurant closed its doors and our lives moved on.

At the beginning of 2014, as if coming full circle, we found a new venue to hold our Manhattan seminars that was back in the neighborhood where I lived when Shya and I began seeing each other. In fact, from our course room in the Skyline Hotel, which is on 49th Street and 10th Avenue, we can actually see the building where we had our first date and eventually lived together. As Shya and I began to reacquaint ourselves with the neighborhood and to explore the area for likely spots to have a bite to eat, we could tell that things had changed dramatically from when we had lived there. Where once it was difficult to find a decent meal, now there are ubiquitous Thai restaurants and plenty of places to enjoy varied cuisine from vegan to steak, Mexican to ramen. So it was with great delight when we came upon an Ollie’s situated mid–block on 42nd Street between 9th and 10th Avenues.

It was late afternoon when we entered and since it was early for the dinner crowd, there weren’t many patrons. Even so, the waitress seated us at a table nestled in a recessed nook against the wall, directly adjacent to an Asian man. After perusing our menus, Shya and I placed our orders and, sipping hot tea, sat back to wait.

Our neighbor had clearly ordered before we did, so it was only natural that he be served first.I was getting hungry by the time the waitress brought his appetizer and I was admittedly a bit nosey, too, for when I go out to eat, I frequently like to check out what other people in the restaurant are having. I have learned about many dishes I never would have considered that way. For instance, I once saw “burnt cauliflower” on a menu and the image it brought to mind lacked appeal. But after seeing caramelized flowerets mounded on someone else’s plate, I ordered some for myself and wasn’t disappointed. So when a porcelain bowl of something yummy looking that I had never seen before was placed on the table next to me, my interest was piqued. Inside a blue patterned bowl with a white interior sat a nest of long square shaped translucent noodles with bits of what looked like garlic in a spicy oil and soy based sauce.

It had never occurred to me that the man sitting next to me would not speak English but when he held his dish out, gesturing for me to take some, I came to realize that he did not speak my language and also that his culture was vastly different than mine. I experienced a split second of indecision. In my background eating off a stranger’s plate, albeit willingly offered, was taboo. I thought to wave my hands and say, “No, no, no! That’s alright!” But somehow this gentleman and I had bypassed the barrier of familiar speech and shared culture and we were now communicating directly. Of course a cynical view might think he made the overture as an expedient gesture since he had no words to explain, but in his eyes I saw that extending his bowl was a genuine offer.

As the man held out his bowl once again, I glanced down at my pristine chopsticks that I had rested on the edge of a small white plate in anticipation of my order of fried dumplings. Instinctively I knew that to refuse would cause offense. But of course accepting the proffered dish was not exactly altruistic. I was also very interested in what it contained.

Nodding and smiling as I said thanks, I took the bowl and deftly lifted out of a few noodles with sauce, placing them on my plate. After thanking the man, I beckoned to the server who had been watching the exchange.

“What is this?” I asked again, for I had never seen noodles of this shape and consistency.

“They are mung bean noodles with spicy sauce.” She replied.

Mung bean noodles? I had never heard of them before.

“Does it contain any fish sauce?” I asked, since I have in recent years become allergic to fish – no more General Tso’s jumbo shrimp for me.

After she assured me that they were fish free both Shya and I lifted a noodle with our chopsticks and tried a bite.

Mmmmm – cool, firm, with plenty of chilies for spice and tiny morsels of something like miso that added a burst of salt and savory at the same time.

We thanked the man once again and gave him space to enjoy his dinner. Shya and I were eventually served what we had ordered and we all ate our meals in a companionable way.

We have gone back to Ollie’s several times since then and my eyes always flick to the corner table recessed against the wall, but I’ve never seen him again. Both Shya and I have ordered mung bean noodles from time–to–time and have introduced friends to the dish as well. Whether we order them or not, we now see them on the menu. It’s funny how my eyes skip right over those menu items that I have not experienced. It’s as if many choices don’t exist simply because they are untried or new. I don’t mind when I am out at a restaurant ordering things that are familiar, things I know I like. But there are a whole host of unknown tastes when I’m willing to be open to something new. New things are also available when I’m willing to put my knee–jerk embarrassment or pride aside and accept a willing gift from a stranger. I’m certain that fellow doesn’t even recall our paths crossing but I do. And I’m grateful for his kindness. It’s hard to guess the difference a spontaneous moment of generosity can make. I personally find our chance meeting inspiring. Contained in it is a microcosm of the sweetness that humanity has to offer.