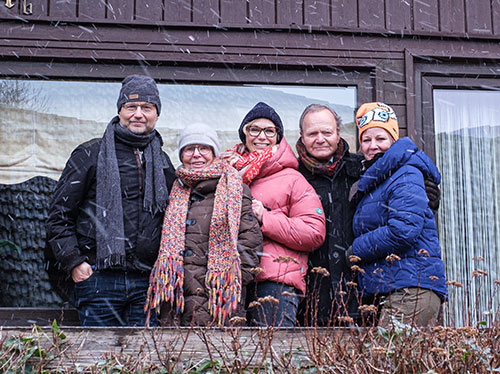 24 May Becoming a Kid Again

This past winter, I got to relive one of the most unique, special experiences of my childhood, along with my brother, sister and parents. Who would have thought that a long-ago family vacation could come to life again? I certainly didn’t, until my siblings and I shifted in our ability to listen to our father.

In the photo, from left to right: Rüdiger, Traute, Meike, Volker, Ute

40 years ago our family went to visit an island in the east part of Germany and spent a summer vacation there. What sounds normal now was not at all normal then – not at that time. This island was in East Germany, the part of our country that was separated from the west after World War 2. 40 years ago people from West Germany could not easily visit.

To cross the border to East-Germany and visit that part of the country was not only highly unusual in the 1980s, it was also rather complicated. Our vacation was only possible because my father had the passion and desire to get to know the other side of the border. In looking for ways to make it happen, he saw an opportunity to rent an apartment from a courageous East German couple, and he grabbed the chance.

For us three children it was a very exciting vacation. We had heard rumors that all the restaurants had hidden microphones and that it would be dangerous for people in East Germany to have contact with “western people.” In fact, we did have to hide the identity of the couple who rented us the apartment, as their son was a famous athlete. If anyone found out that his parents had rented to our family, he would not have been permitted to attend international competitions due to the fear that he might have a western contact he could use to stay abroad.

Fast forward years later, our East Germany vacation was a distant memory. However, ever since East and West Germany were united in 1990, my father had always wanted to visit that island again…but my siblings and I were not interested. The socialist system of East Germany 40 years ago was still strong and the three of us remembered that very important “vacation ingredients” like ice cream or movies were not accessible. Even though we were now adults, we still had the childish idea that a vacation could only be in a “cool” or “modern” place. We never really heard our father’s wish. 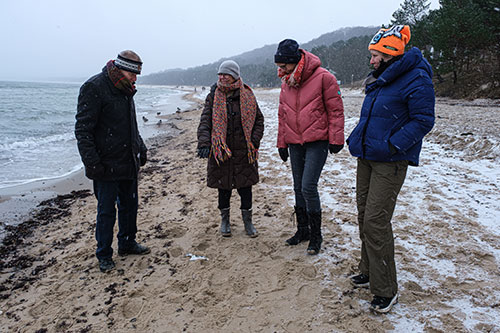 Until, unexpectedly, we did. This past winter my brother brought up the idea of doing a family weekend to visit the island. This time, something had shifted in us and we could see the idea through my father’s eyes. Magically, we all loved the idea. Leaping at the chance, we decided to just do it now and not wait for the summer. And so we went, even though it was cold and snowy.

It was so touching to be there. We met our landlords, now over 90 years old, who had bravely rented their apartment to us 40 years ago. They were moved to tears to see us again. We found “our beach,” our streets and did all the same excursions again.

When we took the old steam train, which had been running for almost 130 years, I told the ticket lady we would need tickets for 3 children and 2 adults – although she could clearly see we were 3 adults around 50 years old and 2 adults around 80. And guess what? That’s what she gave us!. She must have sensed that in our reality, we were 11, 13, and 14 year old kids on a revival trip with their parents.

My parents thought we siblings were doing them a favor, but in fact it was a gift for every one of us and we all felt very close.

I’ve often experienced that taking part in the seminars spreads out to the people around me. Our family is much closer in the past years than we used to be. Before attending seminars, I don’t believe that I, and by extension my siblings, could have truly heard my father’s wish and made it our idea. That’s why I love being part of the Transformational community: I am able to be a “yes” to unexpected experiences and truly feel the sweet moments that life brings me.

What a sweet, sweet story! Thank you, Meike. I also love the pictures of you, your parents and your siblings. What a sweet family:-)