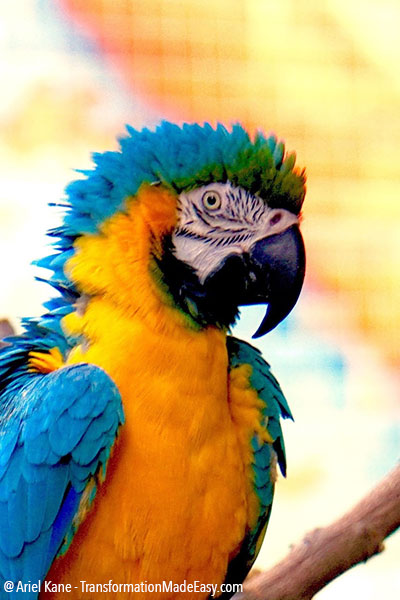 My dad’s memory loss had progressed. Although it had been less than three months since I had seen him last, when Shya and I came to visit, it quickly became clear that Dad’s short-term memory had gotten even shorter.

On the first morning of my visit, I sat at the kitchen table, iPhone in hand, showing Dad some recent pictures I had taken. There were some images from the orchid show at the New York Botanical Garden – vivid close ups in purple and pink. Then I picked my favorite shots from Hawaii, taken at Hilton Hawaiian Village in front of a building called Rainbow Tower. The first was of a parrot with his turquoise and orange feathers mirrored by the rainbow colored mosaic running up the side of the building, highlighted in soft focus behind him. The next was a heron standing on a rock at the edge of a pond. In this one, the mosaic’s brightly colored reflection rippled on the pond’s surface in striated waves. Dad was curious and wanted to know how I got the colors on the water and where the orchids were shot. When I repeated that the orchid images were taken at the Botanical Garden in the Bronx he said the words back to me and I suspected he vaguely knew of the Bronx, having gone to NYU and lived in the area in his youth but now he couldn’t place it in his mind. 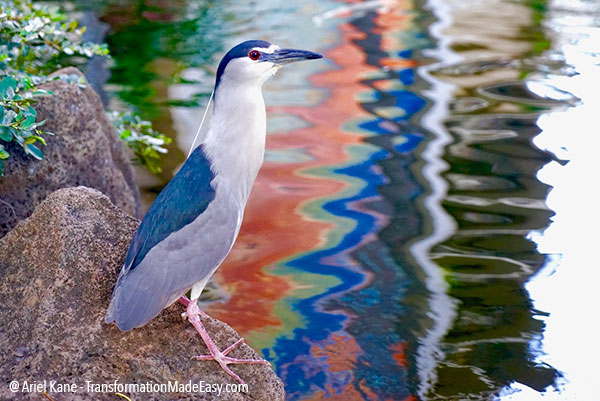 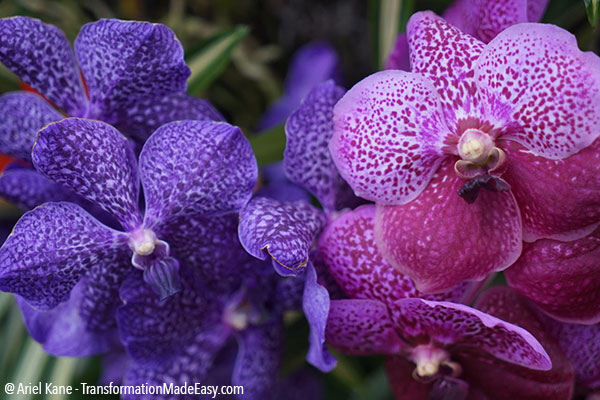 Enjoying my time with him, I wanted to keep him engaged, as finding topics to talk about and things to share has become increasingly difficult. Most casual conversation tends to include memories of the past and plans for the future and these were no longer things that Dad could process. In fact, I had to be aware that I didn’t inadvertently send him retreating into himself by introducing a topic that was too complex for him to follow. 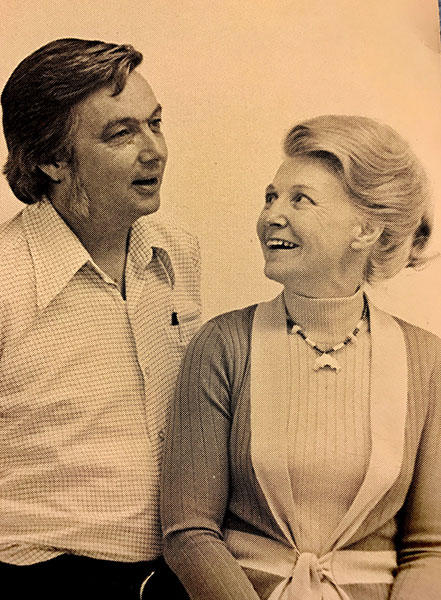 Searching for additional photos I thought might peak his interest, I used my finger to I swipe through the images in my iPhoto library and I came upon some I thought Dad would enjoy. They were shots I had taken of the framed photos displayed right upstairs in the bedroom my sister Mary and I had shared in our youth. They were of my dad and mom in the seventies and eighties at the Glass Butterfly, the store that they had successfully launched when I was in 7th grade. In particular was a shot of the two of them, my mother’s hair coiffed in an up-swept style, and although she is notoriously uncomfortable in front of the camera in this image she was looking at him, beaming and looked genuinely happy.

“Oh Wow! Look at your mom.” He said as my mom came down the hall. “Geri,” he continued. “Look at this picture.”

Bending down near us she looked at the photo. She smiled, placed a hand on his shoulder and gave it a squeeze. They’d been so much younger and so obviously in love and I am sure for her it had been a much happier time. We all chatted for a moment and then she continued on with her tasks as I moved on to other images – some were current, others not. About 5 minutes later, Mom came back through the room again. My dad perked up at that sight of her.

“Show her that picture, Ariel, she hasn’t seen it yet!”

Scrolling back I found the image I knew was on his mind. It was the one he had shown her only moments before.

“Oh yes, I remember that day, Don.” She said. “I had just been given the award as Oregon’s retailer of the year.”

I looked at her, compassion in my eyes. It’s one thing to speak with her on the phone and listen as she tells me that his memory is slipping even further, but an entirely different thing to experience it firsthand. 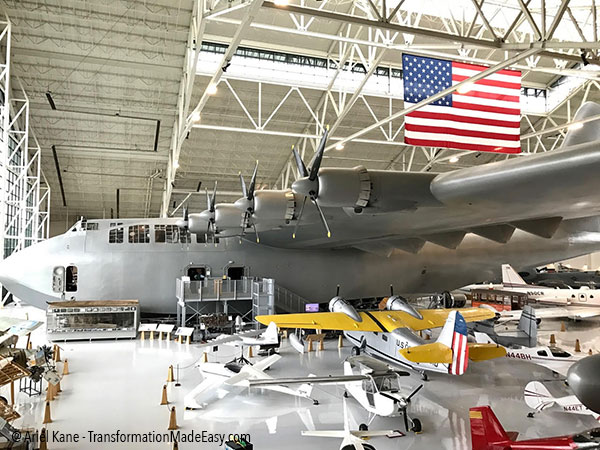 The next day dawned to grey clouds and rain, but Shya and I were determined to have an outing with my folks, nonetheless. We planned to go to the Evergreen Aviation and Space Museum, located in McMinnville, Oregon, about and hour and a half car ride away. Shya had become interested in seeing the “Spruce Goose,” a huge airplane designed by Howard Hughes that was made primarily of birch. It was built toward the end of World War Two and it has an enormous wingspan: Almost that of a football field, 320 feet (97.54 meters). So, we climbed into our rental car, Mom and Dad in back and me riding shotgun. After stopping for lunch in a little bistro in McMinnville, we proceeded to the museum. Dad was appalled that entry tickets were $27 for adults, $24 for seniors and didn’t want to go in but I turned him away from the overhead sign that listed the price. I told my dad that it was Shya’s dream to see the museum, and that we don’t want to disappoint him – all the while hoping to distract Dad for a few minutes knowing the fee would fade away.

I am not sure what all my father comprehended that day, but he was very engaged. He wandered around the cavernous building looking at different airplanes, some of which were the type he had flown in at the end of the war, during his time in the service. I actually learned quite a bit about him that day – mostly from my mom, of course, but bits and pieces from him as well. For one thing, Dad had been a paratrooper and he quickly discovered that he hated heights and hated jumping from planes – he had only enrolled in that branch of the military, he said, because he thought they had cool boots.

By the end of our visit to the museum, both my parents were quite tired as it had been a full day. That evening, the four of us had a light dinner at home before retiring and we talked about what we had seen and done.

“I’m sorry. I don’t remember going and what you’re talking about.” My dad said.

“That’s Okay. You don’t have to remember.” I replied as my mom laid a hand on his arm and gave it a squeeze. “It was lovely just being with you.”

“Wait, Don. I know something that will help.” Shya said, reaching into his pocket and withdrawing his iPhone. In short order, Shya opened the pictures to one I had taken of the two of them standing in front of a replica of The Spirit of St. Louis, the airplane that Charles Lindberg flew on the first nonstop transatlantic flight from New York to Paris. Holding up the phone he said, “Here Don. Ariel took this picture of us today.”

“Oh yeah!” He exclaimed. “I remember.” – and in that moment, his face lit up and I saw a window in his mind open briefly.

“We had a really great time.” I said and Shya and Mom concurred.

“Yes,” Dad said as he arose from the table, heading for bed. “We’ve had a really good day.” 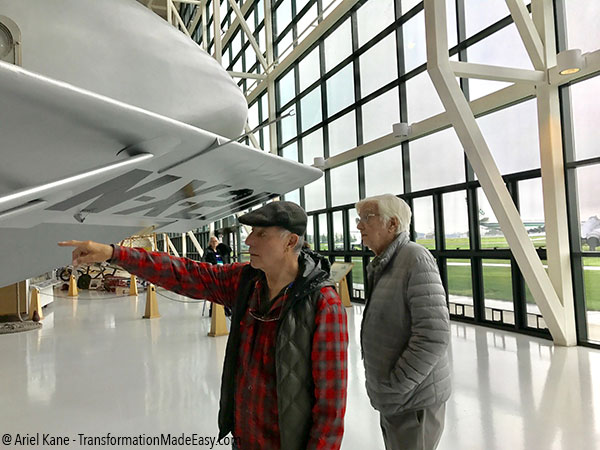 Although I knew my Dad’s recollection of the day would be gone before he awoke, likely even before he laid his head on his pillow, as he went to bed he seemed to be at peace. We weren’t trying to build memories for him, with him. Our aim, if there was one, was to be there to experience each moment and enjoy it. It wasn’t to retain the experience. It wasn’t to be able to talk about it, even in a day’s time.

Spending time with my folks in the museum that day is a special memory of mine. But even now, a few months later, the memory has faded into the past as life has moved on. I have pictures that can spur my recollection, too, and bring that day back into focus, but for the most part, what I’m left with, is that it was a really good day.